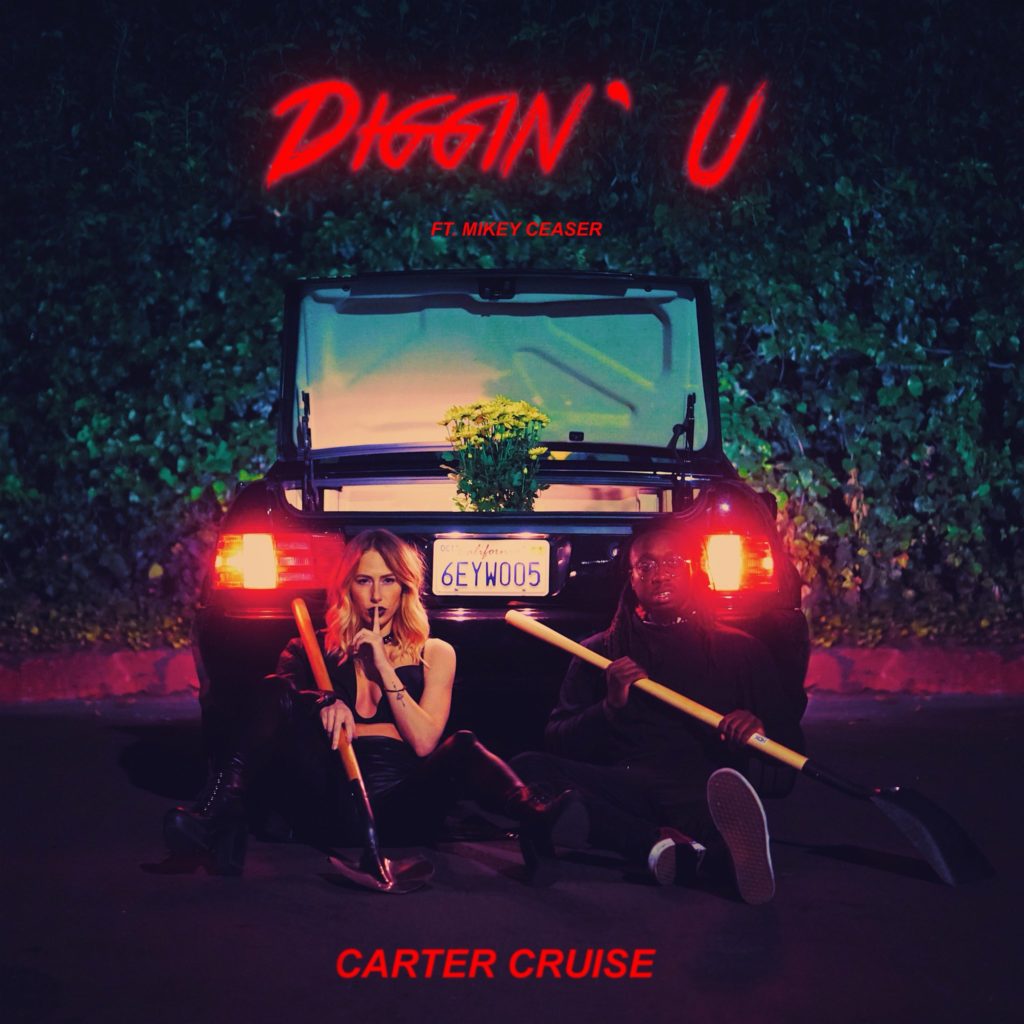 Rising producer Carter Cruise has teamed up with RMG alum Mikey Ceaser for a laid-back new single titled, “Diggin’ U.” The track comes as the lead single off her upcoming #SendMoods EP, completely living up to the EP’s suggested moody feel. The track utilizes a low and simple beat to effectively establish an almost trance-inducing vibe, supported immensely by the range of intensity in Carter’s sultry-yet-dark vocals.

We spoke with Carter about a few topics (full interview at the bottom of the page) and, in her own words, she states that the track follows a “femme fatale type living in an old mansion surrounded by gardens and luring men there to bury them beneath her roses. So there’s really two meanings to the song. There’s the more literal “diggin you a grave to bury you in” and then there’s what the song is really about which is wanting someone when you know you’re going to hurt them.” This clandestine atmosphere is felt throughout “Diggin’ U” as Carter was able to effectively convey her story through song.

Stream the track on Spotify above or HERE (if you’re an Apple Music/iTunes user) and be sure to give her interview a read below!

Q: Were there any specific inspirations behind the creation of “Diggin’ U”?

A: Initially I sat down to write a song about when you want someone for selfish reasons, but you know you’re ultimately going to self sabotage because of your own fucked up tendencies. I had heard the expression “body count” referring to sexual conquests, and being a normal girl who loves serial killer things (I blame SVU), I wanted to expand on that metaphor. Music is a form of storytelling for me, so when I write I like to create a whole character in my head. I imagined this femme fatale type living in an old mansion surrounded by gardens and luring men there to bury them beneath her roses. So there’s really two meanings to the song. There’s the more literal “diggin you a grave to bury you in” and then there’s what the song is really about which is wanting someone when you know you’re going to hurt them.

Q: Support within the artist community is so important but we don’t always get to see artists on the rise really support each other when they aren’t on the same management or label. You and Gatsby are always supporting each other’s releases. How did your relationship first start?  What has kept it growing?

A: I actually met Greg when he was opening for me and he was so good! I remember getting kind of self conscious like damn, I should be opening for him, but he was so humble and went out of his way to make me feel like I deserved to be there. The entertainment industry is so ego driven so I knew then he was a rare find and someone I wanted to stay friends with. When I started producing more we started sending each other stuff we were working on and he was always so encouraging of even the most basic shit I sent him. We always take the time to listen to each other’s music and give feedback so it’s that continued effort that’s kept it going.

Q: There has been a rise in the number of female producers enjoying success in the EDM community, yourself included. Unfortunately, really talented female producers often go overlooked in what has been for the most part, a male dominated industry.  What words of advice or encouragement would you give to any women out there trying to break into the scene that may be concerned with being taken seriously and given the respect they deserve?

A: Sexism in the industry is definitely a conversation we should be having, but I think that as a female talent, you shouldn’t focus on it too much or it will start to affect how you think of yourself. You have to demand respect by the way you carry yourself and your work ethic. If you walk into a venue and you’re prepared and confident and know how to set up all your own stuff, you’re naturally going to get more respect than if you walk in feeling insecure about how you MIGHT get treated. At the same time, I think it’s important for women in music (and everywhere!) to support each other. Find women doing similar stuff and collaborate. Instead of trying to be the one “cool girl” in the boy’s club, find dope women you want to support and work with and start your own club!